After our 50" Pioneer Plasma TV died, we decided to replace it was an LG 55" 4K OLED purchased at a Black Friday discount plus 5% cash back via credit card, tax free and shipped free. This thing is amazing, as it's contrast ratio is infinite, producing true perfect black levels. Its pixels can turn off 100%, which even a plasma pixel cannot do. The perfect blacks combined with enough brightness give it a dynamic range able to properly display HDR content - unlike some current LCD HDR displays. The color capability is also impressive. Standard 8-bit panels, give you 256 color variations for each Red, Green and Blue subpixels, which totals 16.7 million possible colors. Tack on 2 more bits, and you get 1024 variations of each color for over a billion colors overall. I was also impressed with LG's WebOS GUI and gyro propelled remote control. I was never a fan of integrated smart TVs, but this is a pleasure to use. It will even natively stream local stations via my SiliconeDust HD HomeRun networked tuner, albeit not as fancy as the Apple TV STB. A small detail I later noticed was that the clear plastic base makes it appear as if it was floating above my sound bar. Slick. 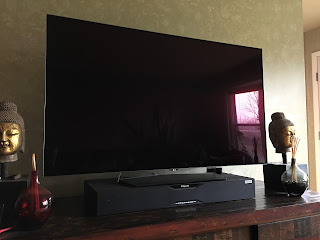 I can't get a great screenshot with my iPhone. You have to see it in person to fully appreciate the details! 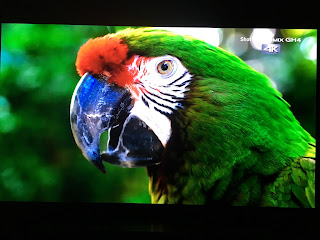 The screen itself is about as thick as a car's side window! Then halfway down the electronics enclosure adds maybe 2 inches of thickness. 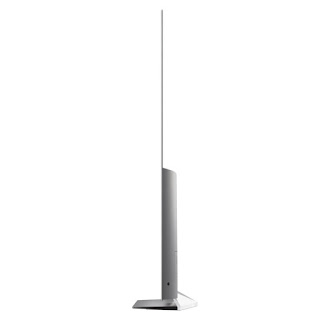 As far as the poor Kuro plasma goes, I'll attempt a repair it at a later date and if successful I'll install it in my workshop, or try to sell it locally. I hear there are still Kuro fanatics out there willing to pay more than a penny for these displays.

Posted by Vinculum at 8:22 PM No comments: