The first installment of regularly posted links of interest that I stumble upon. I'll have a permanent link to show only these posts on the sidebar to the right. Enjoy!

I need to try vinyl one of these days. Maybe this is a good starting point?


"After consulting experts in the field and reading countless reviews, the entry level turntable to buy today is the Pro-ject Debut Carbon. It comes with the best combination of tonearm and cartridge of the entry level models out there, and is built well enough that you can upgrade the cartridge or other components down the road without needing to replace the table first."


Does that new album sound better on CD, Vinyl or HDTracks?  Find out here before you spend your hard earned money.

A very good article on why you DONT want a high sampling rate. Open this in a tab and read it later if you don't have the time. Its worth it. I like articles that have solid science backing them up. This is one of them. I'll also link the video accompanying this article because it demonstrates how science backs up facts and dispels myths about DA/AD conversions. I hope Monty makes more videos like this.

I finally worked out my issues between Google's blogspot service and my domain registrar. Something that is normally so easy turned out to be a huge hassle because I had two different Google accounts and didn't know it. The result now is you can reach this blog directly at www.magneticmadness.com

The next thing I want to announce is I am going to start making posts about electronics and technology projects in general, in addition to the audio/video. A lot of folks into audio and home theater tend to have interests in line with other things I'm doing and would love to write about, so why not broaden the bandwidth a hair and open it up to more visitors?

Also if you feel so inclined to donate to my blog or future endeavors with the audio system, please click the logo below to make a Paypal donation and you will receive my highest accolades!

Posted by Vinculum at 9:25 AM No comments:

A humorous, yet serious rant about over priced audio cables. I didn't expect to laugh so hard. A worthy watch and a reminder of how gullible some people can be!


I attended Mark "Basspig" Weiss's 2nd Annual B.A.S.S. meetup this year and had a great time, despite being a little under the weather with a headache and being late to arrive. He wrote a great summary of events so I won't type a redundant article, but I'll leave you with a reprint and some brief comments. I will add that there were also some interesting discussions on vinyl. Mark played back some digitally recorded demos of a how a laser turntable sounds vs. a standard electromechanical turntable. This later spurred some research on laser turntables and "high fidelity" records. Vinyl is a whole other world to learn about. While interesting, Its not something I'm going to get into. I do know one thing. I love the overhead Mark's system has and always enjoy hearing it. I have not heard any other system that has this powerful finesse. It reminds me of practitioners of Chen style Tai Chi who's art is calm and flowing but also deadly fast when needed. If there is one thing I'm reminded of that I need to do to my own system, it is to increase the displacement capability by several orders of magnitude. What a difference this makes, even at low volume levels. Stay tuned!


Mark's summary is as follows..

As with last year, our B.A.S.S. Meet was a great success!

Thank you to all who attended and brought so many great food items as well!

The main audio/video demo featured my Blu-ray productions of the Bridgeport Symphony Orchestra with Alex Beyer, performing Rachmaninoff's Piano Concerto No 3 in D minor, then the GBS performing Rachmaninoff's Symphony No 2 in E minor, (selected movements), then Allison Eldredge with the Boston Classical Orchestra, performing Saint-saens Concerto for Violoncello in A minor, then the Zambelli Ultimate Fireworks Blu-ray that I had the pleasure to capture from the launch pad, then I played a track from a Japanese soundtrack "The Weathering Continent" as a 2-channel Sonic Holography demo. Next up was a demonstration of the dbx 500 Subharmonic Synthesizer. For this demo, I used appropriate material lacking in fundamental bass (Average White Band "Pick Up the Pieces") and then gave an example of the absurd Bass Pig effect when you use it with Reggae music that DOES have some bass.

We took a break at the buffet and then returned to the Lab portion of the day where I demonstrated Bell Labs' new tri-tone test for Transient Intermodulation Distortion. We tested a Sansui AU-9500 against a Lepai 2020 amplifier. The results were colorful and interesting. The test setup consisted of three Tektronix SG5010 precision audio oscillators, outputting 10.05KHz, 9KHz and 20KHz, respectively, summed into a resistor network which fed each of the audio amps under test. I also performed traditional THD and SMPTE/DIN IMD testing. The Sansui easily tromped the Lepai on traditional tests, with ultra-low .028% THD, but the tables were turned when the tri-tone tests were performed, with the Lepai being an order of magnitude lower in TIM distortion than the Sansui.

And finally, I fired up the HP 8568B spectrum analyzer, connected to an outdoor antenna, and displayed the spectral mask of several FM stations, some with and without IBOC (In Band On Channel) or HD Radio digital transmission, discussing the effects on DX listening with the presence of the wider digital sidebands.

Our last guest showed a BD of Baraka on our big screen, which provided a colorful and sometimes disturbing look at life around the world, focused mainly around Asia.All in all, a positive experience, many questions and positive comments.

Posted by Vinculum at 8:40 AM No comments:

Email ThisBlogThis!Share to TwitterShare to FacebookShare to Pinterest
Labels: Basspig 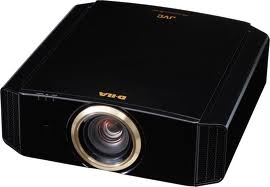 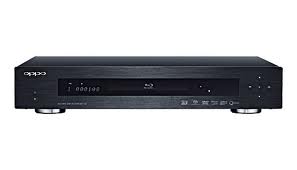 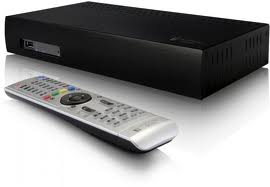 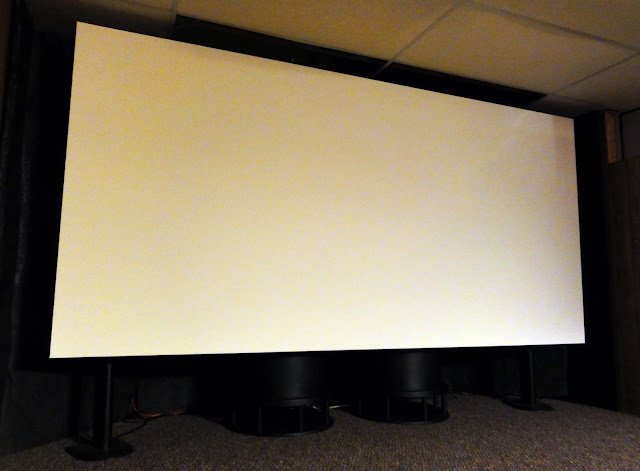 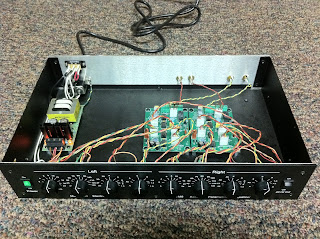 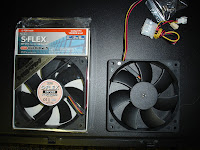 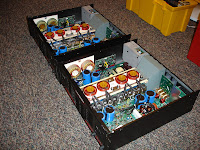 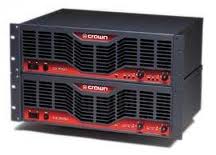 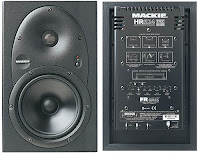 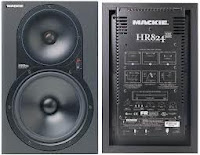 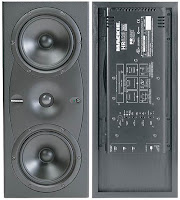 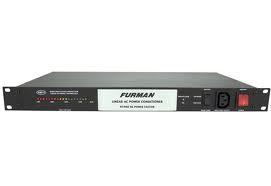 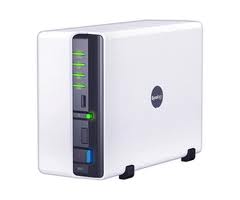 I compiled some videos about the subwoofer drivers in my audio system. It is an introduction and comprehensive look at the metal and soft parts which make up an Acoupower driver. You may have seen the introduction posted here before, but this includes videos of the inside of the drivers. A full 20 minutes worth. I'll soon publish a post showing the buildup of my cabinets and other data.

A quick summary of specs on these amazing 18" drivers :

- 6" copper 2 layer voice coil in an underhung configuration.
- Largest neodymium magnet used in any loudspeaker
- 97% of magnetic field lines in the gap
- Entrainment techniques used to eject hot air from the motor
- 5 sqft. of heatsink surrounding the motor
- 18mm of one way throw and still at 100% linearity on the BL curve.
- 39mm of one way peak throw
- 1% odd order distortion with 1KW input power