I just installed an interesting piece of gear into the signal processing rack of my sound system, a Carver C-9 Sonic Hologram Generator. Designed by Bob Carver in the 80's, his Sonic Hologram Generator has been a feature in various Carver preamps at the time. The C-9 is a stand alone unit that some have called his finest implementation of the technology. I've wanted to tinker with Sonic Holography in my own system ever since it was demonstrated to me by a friend, Mark "Basspig" Weiss in his incredible sound system. 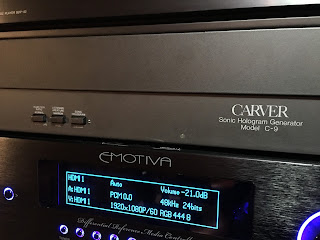 The problem it attempts to solve is called acoustical crosstalk. What's that? For example the sound from your LEFT speaker is heard by your LEFT ear. Inevitably some of this sound is also heard by your RIGHT ear slightly delayed, otherwise known as acoustical crosstalk. This can cause some anomalies in our perception of the sound. Headphone aficionados don't experience this crosstalk at all as you can imagine, which is one of the reasons people love the sound of headphones.

So what does this thing do?

It's basic function is to take a 2-channel audio recording and attempt to eliminate acoustical crosstalk between the speakers and your ears. The Sonic Hologram Generator does this by sending an inverted copy of the audio signal to the opposing speaker with amplitude and delay such that it actively cancels the crosstalk at your ear. This can create a similar effect to using headphones, only instead of the sound appearing only inside your head as headphones do, the sound can appear in front of you anywhere in a 180 degree hemisphere. When implemented correctly, it sounds incredible. For a very detailed explanation you can read about it in the patent here. Simplified in the diagram below the Lr and Rl paths get nulled out by producing an inverted signal from the opposing speaker mixed in with the wanted direct sound paths Ll and Rr.

This all sounds interesting but there are a few downsides to be aware of.

1. It's very dependent on the program material chosen. Not all music lends itself to the effect.

2. Some rooms it just doesn't work well in. Speaker placement and listening position is critical. See the manual for more information.

3. You must be in the "sweet spot" to hear the effect. If you move about 18" in either direction the effect goes away. This can be adjusted by a small amount with the Listening Aperture button.

Despite these shortcomings I look forward to playing around with the C-9 with my 2-channel recordings. You can find the C-9 on EBay for $100 or less most of the time, which is where I bought mine. Upon receiving I opened its up to examine the inside and it looked really clean and in good condition. The power supply electrolytic capacitors showed no signs of distress and the rest of the caps are green polyester film types. I did clean the switches and RCA connectors with Deoxit D5 while it was apart. You can install this in series with any music source like a CD player or if your processor has an external tape loop connection you can use that. There are 2 sets of RCA connectors on the rear, in and out for the left and right. The unit itself has no power on/off button, but it does have a bypass/engage switch. I might add a power switch to the front panel in the future. There are also some other switches for varying parameters to a degree. Listening Aperture can be set to narrow or wide and Injection Ratio can be set to normal or theoretical. This is the amount of crosstalk correction applied. Also note that you may use this device to encode the Sonic Holography signals into a recording itself for playback on a system without the hardware. 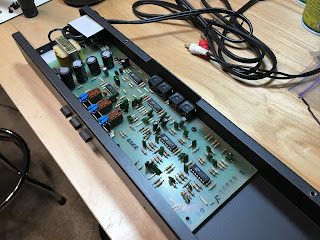 While I find discrete multichannel audio greatly enjoyable to listen to, the selection is limited. There are a lot more 2-channel recordings in the world to hear. Sure we have Dolby PL2x and DTS's Neo:6 and many other processing modes that create multichannel surround from a 2-channel source but properly dialed in stereo sounds good too. Add in a Sonic Hologram Generator and if your setup is just right you will swear there are speakers in places none exist. That's magical!

Email ThisBlogThis!Share to TwitterShare to FacebookShare to Pinterest
Labels: Music, My System