On the bench today is a blast from my past. A clean Commodore 64 computer and Commodore 1702 monitor I just bought. I spent many nights pounding away at the keyboard on a computer exactly like this in my teen years, along with a dedicated tribe of friends many of whom still have their C64 computers. Despite how advanced emulators are today, there's nothing like having original 8-bit hardware running right in front of you. 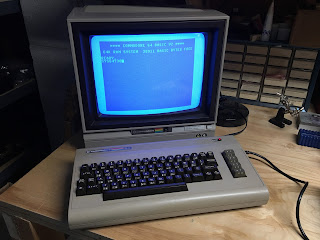 I popped the top to have a look at the motherboard and everything looks to be in good condition. No bad capacitors or evidence of past repairs or disasters. It's a Version A Rev B motherboard made in Hong Kong in 1984 which makes it a very common board. It has the 8-pin video connector which offers separate chroma and luma signals to present the monitor with a very clear 320x200 NTSC picture. The sound chip (SID 6581) is also socketed in this version. I'm not going to get too geeky about it, as I just wanted to have a nice usable machine to have fun with. I have a stack of 5 1/4" floppy discs I saved from all those years ago with personal data and programs. I'll probably get a few extras along the way like an SD card based drive emulator, a real 1541 5 1/4" disk drive and perhaps a PC interface for the drive as well. 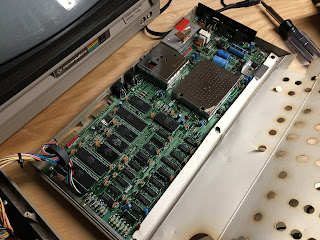 These specs look really silly compared to modern day computers, but 35 years ago it was awesome to have such hardware in your home. Clever programmers optimized their code to make the most out of the hardware. Sloppy programming wasn't allowed and RAM wasn't cheap or in abundance like it is today.